Treats 2500 Gallons The Continuum Advantage Marine snow is a word first coined by American naturalist, marine biologist, and explorer William Beebe in the 1930’s to describe the continuous shower of organic and inorganic particles that he observed from his bathysphere. In the ocean, marine snow provides a means of transporting nutrient rich matter from the photic zone near the surface towards the ocean floor. Continuum Ocean Snow replicates this process by providing a rich source of both organic and inorganic nutrients simultaneously. It provides aragonite based inorganic minerals, as well as rich marine proteins and lipids in ratios necessary for coral growth Use in Aquarium Keeping Ocean Snow provides an excellent means of supplying both organic and inorganic nutrients to filter feeding invertebrates of all types. It is useful for hard and soft corals, tube worms, clams, sponges, tunicates and others. Continuum recommends that the hobbyist vary the types and sizes of foods delivered into the reef aquarium. Other Continuum foods that make good choices for this food rotation include Zoo Blast and Phyto Blast. Also, occasionally blending the foods and using them as soaks for other foods will give your invertebrates a variety simulating nature. Vary the time of day for feeding, as well, being sure to feed at night for those organisms that primarily feed nocturnally. Many corals feed primarily at night, extending their tentacles and mesentarial filaments, using their nematocysts to capture prey, and entrapping prey on their sticky tentacles with mucus and drawing it into their mouths
Coral food
Marine snow 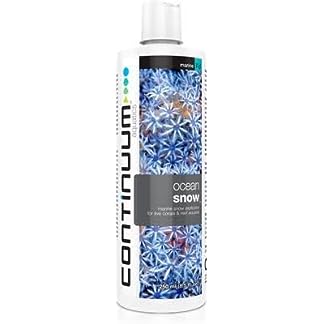